“In other words, the racial disparities as to AIDS were appreciably less than the disparities with respect to HIV; that again speaks against a correlation between HIV and AIDS...

- The Origin Persistence and Failings of HIV/AIDS Theory, p 106.

This of course is also an example of pseudoscholarship. “F(HIV)” is a term of Henry’s own invention which he uses variously and indiscriminately to stand for the incidence or sometimes the prevalence of diagnosed HIV, or specifically for the ratio of positive and negative diagnoses in a given study of a certain selected population at a particular time. Sometimes he uses it to refer not to HIV diagnoses, but the results of the initial antibody screening test – for example in infants born to HIV infected mothers, and in whom the presence of HIV antibodies is not diagnostic (you can’t distinguish between the infant’s own antibodies and those of maternal origin). It is not clear if he understands that these are (at least) four quite different things, and mixing them up botches the analysis and the conclusions you can validly draw.
In this case, he seems to be using the pseudo-term to stand for HIV prevalence (or maybe incidence?) throughout the black and white populations in the US over the period 1981-2000. He’s claiming that the proportion of the HIV positive population who are black has remained constant over that period.
In reality, it is very difficult to accurately estimate HIV seroincidence or seroprevalence over the whole country from early contemporaneous data for the simple reason that unlike AIDS diagnoses, HIV diagnoses were not notifiable on a consistent nationwide basis. They still aren’t: the most recent data on the CDC website estimates HIV diagnoses only for the 34 out of the 50 states that had long term confidential name based reporting.
Instead, what “Table 28” on p 107 of OPFHAT consists of is a collection of various studies performed at various times among disparately selected populations (army recruits, antenatal clinic attenders, gay men, college students) and not surprisingly the black/white ratio of incident diagnoses varies widely between different studies at different times in different populations, from as low as 1.5 in one study to 15.5 in another. There is no discernable pattern over time for the simple reason that each study is measuring completely different populations. They are not validly comparable. But no discernable pattern over time is not the same thing as constant over time.
Even here, though, Henry appears to have been somewhat selective in his choice of studies to support his contention, despite his insistence that “I did not omit any contradictory data about HIV test results, nor am I aware that any exist; I would appreciate being given the citation to any that I had failed to find.”
Not included in "Table 28" is, for example, a study by McNeil et al in 1991 of seroconversions among US military personnel. This is the follow-up study by the same authors of the very first reference of "Table 28", and is readily available in full free text on the net.  This study is salient here, because unlike the mish-mash of studies in "Table 28" of OPFHAT which try to compare completely disparate groups in different study settings, McNeil et al compare seroconversions during three different periods between 1985 and 1989 in essentially the same population: soldiers in the US army, who were recurrently tested. And not surprisingly given what we know about changing racial patterns of AIDS diagnoses over time, what they find is that the ratio between white and black HIV diagnoses changes noticeably, even over that 4-5 year period: 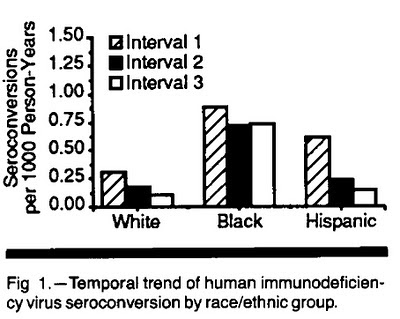 Source: McNeil et al: Trends of HIV seroconversion among young adults in the US army, 1985 to 1989: JAMA 1991; 265: 1709-1714.
Of course, you cannot take a single study of the observed change in black/white ratio for seroincidence in the US army over a short period during the 1980s and extrapolate that to the entire US population over the entire course of the epidemic. But what McNeil et al found is at least consistent with the mainstream view that HIV incidence ratios by race have changed significantly over time, and is inconsistent with Henry’s utterly baseless claim that they have remained stable.
In summary, Bauer’s claim that “the black to white ratio of [HIV incidence or prevalence – I’m not sure what F(HIV) is supposed to refer to here] has remained the same with no obvious change, for 20 years” is not sustained by his data. The problem is that while it is almost certain that the disproportionate rates of HIV infection among African Americans has become more marked year by year over the past 30 years or so, there are no reliable notification data about HIV incidence in the US (and the relative proportions of African Americans and whites infected) from the earliest days of the epidemic.
This trick of finding a gap in the reliable surveillance data and then cherry picking studies or making up figures to fit the hypothesis is a common rhetorical strategy among HIV/AIDS denialists. Bauer does it frequently, and it’s the basis of much of Duesberg’s epidemiological argument. It is, for example, the basis of their notorious “1 million constant US seroprevalence ever since 1985” canard – a nonsense argument constructed from the fact that 1980s US HIV prevalence estimates were made not by counting HIV notifications (let alone actual infections in a given year), but were based largely on very rough back calculations from a relatively small number of notified AIDS cases and as a result had huge ranges of error.
Posted by Snout at 9:15 AM

I do not know much about statistics, but is obvious that Bauer does not either. He is once again "bauering" the evidence to suit his theory.

Speaking of Bauer's theory, I am more than a little bothered, not by the theory itself, but the fact that he does not offer up one bit of proof. You summarized it quite well with:

"...he hypothesises that African Americans are more likely to test HIV positive because of supposed racially-determined genetic variations that result in an extremely high rate of false positive HIV diagnoses. What precisely these variations might be and how they cause clinicians to make false diagnoses - well, he's more than a little vague on this..."

Also, as you point out, how the Hell can Bauer use F(HIV) and not be consistent with the use? That is just really, really poor research writing technique. Also, even I, with my woeful ignorance of statistics, knows that incidence and prevalence are not interchangeable.

Just these basic errors show that Bauer is completely out of his comfort zone.
JTD